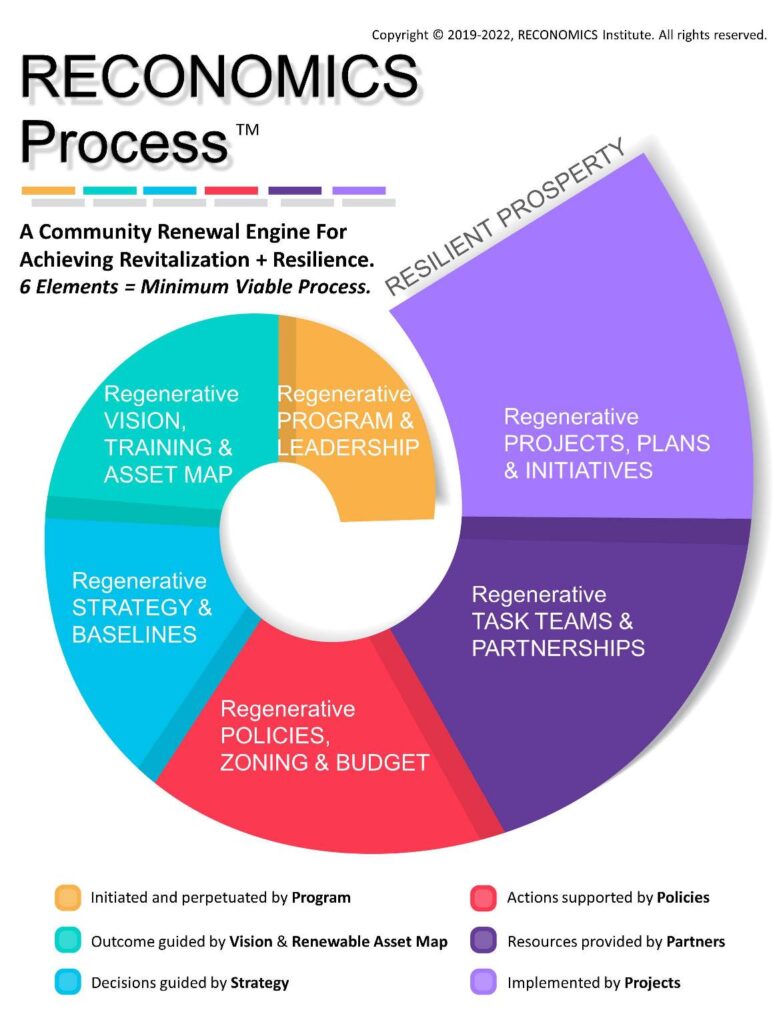 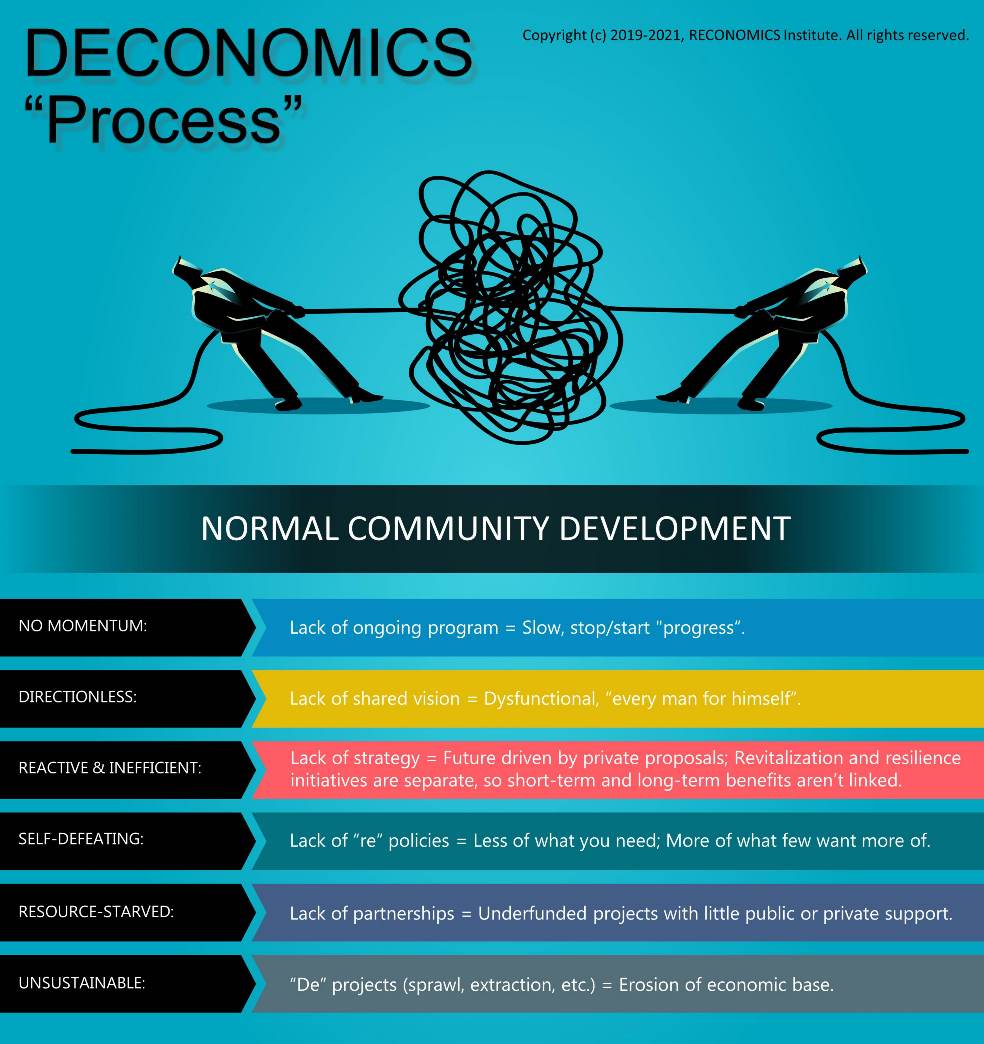 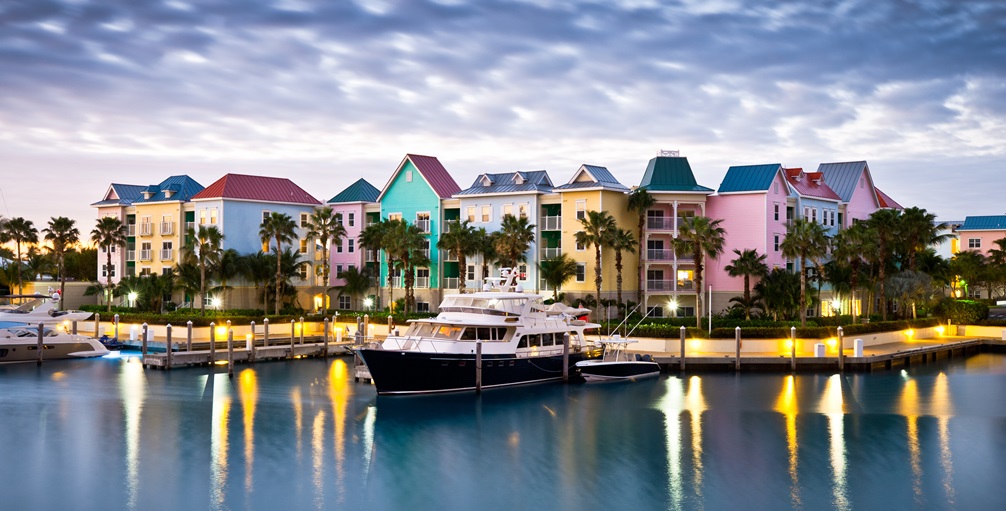 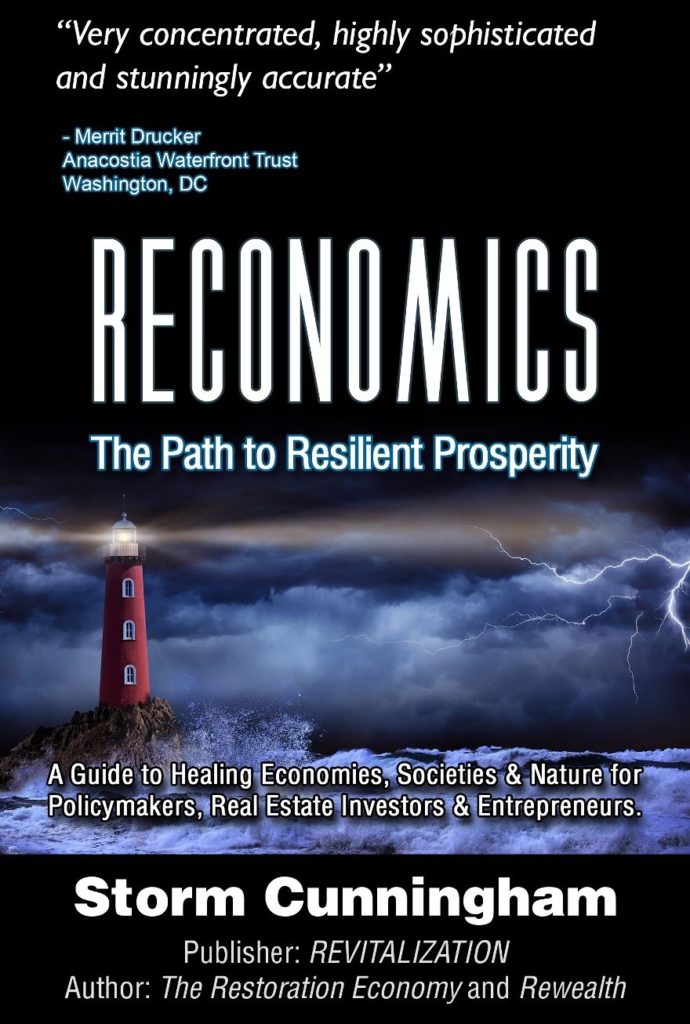 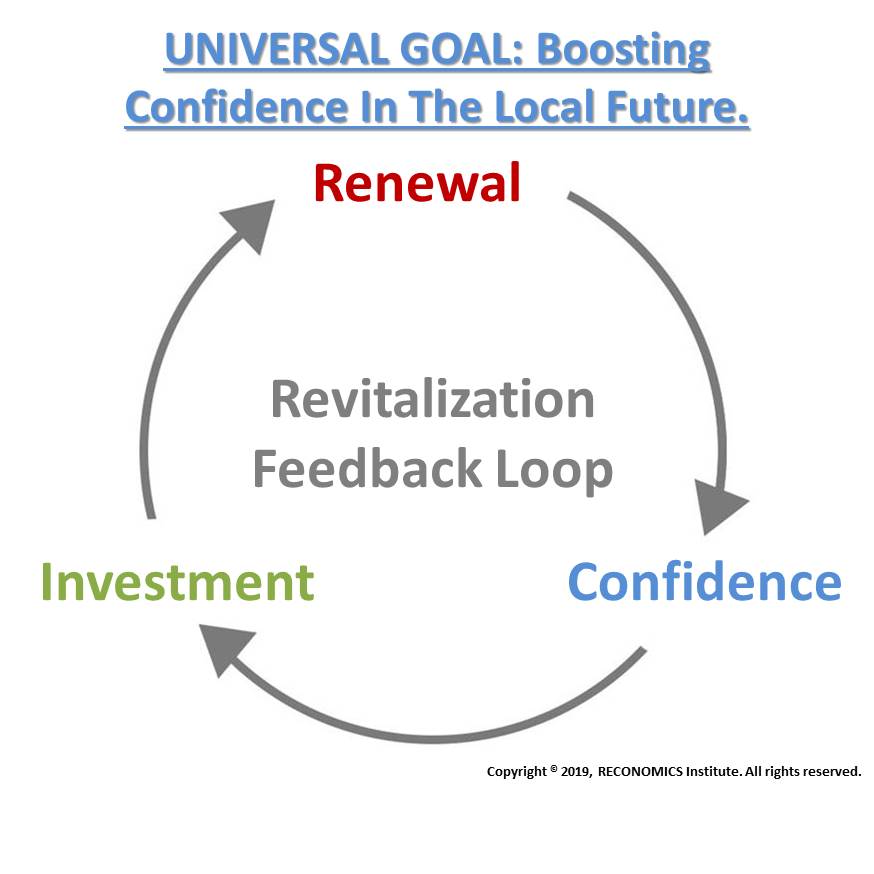 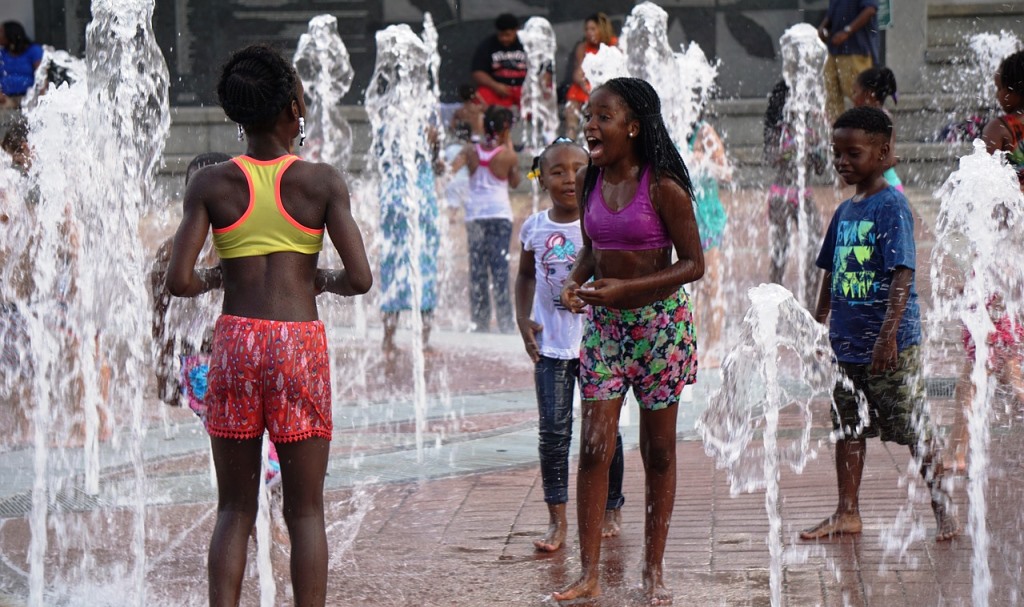 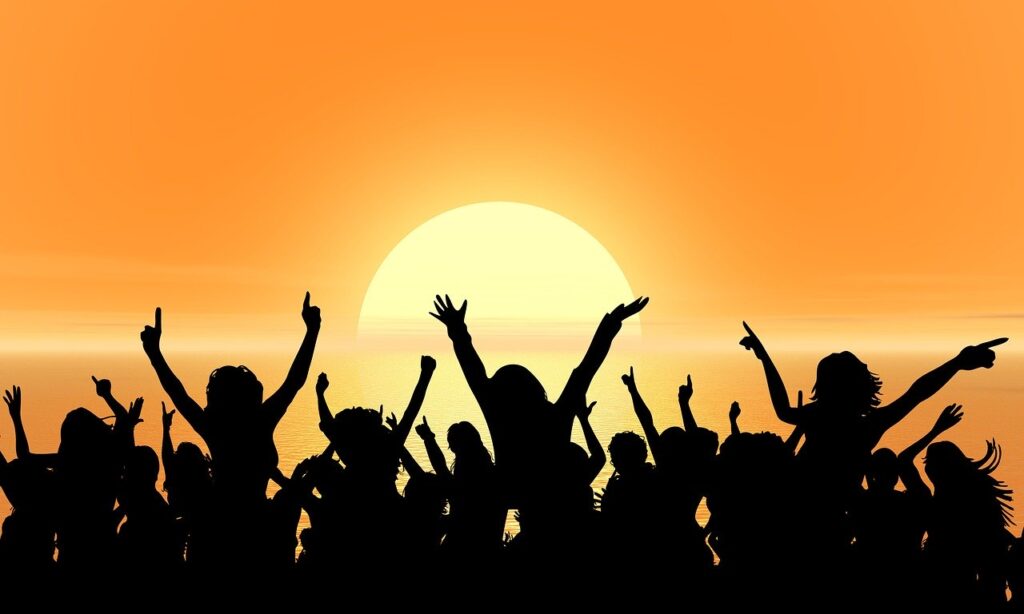 “The RECONOMICS Process raises the bar for community and regional revitalization. It’s a powerful package, succinctly capturing the process we have doggedly tried to identify over time, not always knowing the next step.  The RECONOMICS Process brings a holistic dimension to redevelopment, inextricably linking vision and task.“
– ERIC BONHAM, P.Eng, Board of Partnership for Water Sustainability in British Columbia; former Director, BC Ministry of Environment;
former Director, BC Ministry of Municipal Affairs.

About 90% of recovery, revitalization and/or resilience efforts fail.
Most places—probably yours—have a long history of visions, plans, charrettes, summits and political promises related to creating a better future…a better future that never arrived.

Global research spanning some 25 years has revealed the reason a few cities and regions experience dramatic, lasting (resilient) revitalization, while most see little or no change in their economic trajectory…often despite impressive plans and massive investments in redevelopment.

Successes are rare because, until now, the reason for their spectacular results has never been documented, so each place arrived at the same solution via hit-or-miss efforts based on uncommon sense and intuition. We’ve dubbed that solution the “RECONOMICS Process“.

Now, communities can skip the trial-and-error, enhancing the success of their revitalization and resilience efforts via a method that costs virtually nothing to implement. Even better, it enhances local “renewal capacity” without disrupting projects that are already in the pipeline.

The quickest way to launch a local RECONOMICS Process is to have at least 10 certified RE Facilitators among your community’s public and private leaders before you launch your next redevelopment project, resilience initiative or revitalization program. (The easiest way to do that is via our RE Accelerator Program.)

Without resilience, revitalization doesn’t last. Without revitalization, resilience can protect existing prosperity; but can’t increase it.  Economic revitalization often provides the funding for resilience efforts.  Similarly, in the natural environment, there’s no resilience without regeneration. But our ecological restoration efforts won’t last if we don’t focus on resilience.

One of the major reasons more resilience projects (such as green infrastructure) don’t get funded is due to an antiquated decision-making process used by most municipalities: the  cost-benefit analysis (CBA). The many valuable economic and social benefits of resilience are off in a future that’s not measured by the CBA. Revitalization projects, on the other hand, tend to have more immediate benefits that the CBA can capture. Combining resilience and revitalization efforts thus helps fund the former and further justifies the latter.

So, factors #2 and #3 are straightforward. Let’s examine factor #1 more closely: lack of a complete renewal process.  As you’ll learn in a moment, a process is needed to reliably produce anything. So, if a politician promises revitalization or resilience, ask him or her what process will be used to produce it. If they can’t answer that question, it’s just an empty campaign promise.

Every place has some of the process elements, such as projects, policies, partnerships, etc. Few have all. And even those that have all the generic elements of the process often forget that each of those elements must be regenerative in nature.  For instance: policies that encourage sprawl undermine downtown revitalization projects. Zoning that doesn’t respond to market needs—such as the current increase in demand for downtown warehouses and residences—also sabotages revitalization. And none of this works if not reflected in budgets.

“Most cities have a much larger bioregional ecosystem that they draw from for energy, water, food, materials, waste processing, and other urban activities, such as recreation. These areas around the built-up city also need regeneration if a city is to be truly resilient.”
– from Resilient Cities, published in 2017 by Island Press.

A good redevelopment project can have a revitalizing effect, but that’s not the same as actually putting the community on a new trajectory. For that, a strategic process—with an ongoing program—is essential.

Local residents are seldom aware that a process is needed to reliably produce anything. So, if you ask them why an initiative failed, they’ll say things like “lack of funding”, “poor leadership”, “insufficient stakeholder engagement”, “paucity of partners”, etc. But those are just symptoms of not having a strategic process, not causes.

The First Fundamental Improvement in the
Process of Improving Places in Over a Century.

“Place-based economic development programs…often fail to benefit the places and people they are intended to aid.” – says a 2021 Pew report that researched  four decades of failed revitalization initiatives.

There have been many advances in community development and redevelopment in the 100 years, but none of them involved the process. We have new information technologies (such as GIS). We have design and planning that’s greener (LEED), more pedestrian-oriented (New Urbanism) and better engaged with residents (placemaking, tactical urbanism, etc.).

We have better building materials, new tools for undergrounding infrastructure, new machines for quickly repaving roads, and countless other innovations that have improved efficiency, reduced toxicity, and enhanced beauty. We have better policies (smart growth, mixed income, etc.), better zoning (mixed-use) and better regulations (smart building codes). The past century also brought us better ways to finance all of this activity, such as TIF, CDFIs, crowdfunding, etc.

But we haven’t seen a single improvement in the actual process of improving places…achieving revitalization and/or resilience. The closest most places come is a process for granting entitlements (approving or denying redevelopment permits), but that’s hardly the same thing. Any business leader will tell you that process is where the magic is. Henry Ford’s key innovation wasn’t in designing a better car: it was in the process of producing cars faster and better, which enabled him to offer the customer more for less.

That’s what the RECONOMICS Process does: it makes community recovery faster and better, enabling leaders to offer residents more improvement in less time for less money. There are two systems involved in any effective change effort: the target system you’re trying to change (the community or region), and the change system itself. The RECONOMICS Process is the change system.

In organizational management, strategic alignment is the process of ensuring that an organization’s structure, use of resources, and its culture support its strategy. The RECONOMICS Process accomplishes this for communities.

The groundbreaking new (2020) book, “RECONOMICS“, describes reconomics as the study and development of processes that produce resilient recovery and revitalization in communities and regions.  These processes are based on strategic, programmatic regeneration that repurposes, renews and/or reconnects built, natural, social and economic assets.

As a result, local leaders worldwide now have a proven approach to producing what they all want: resilient prosperity. They can now address complex agendas without making governance more complicated. Today, virtually every place on Earth needs to simultaneously produce crisis recovery, economic revitalization and community resilience. Properly applied, the RECONOMICS Process does exactly that.

Understanding a Revitalization or Resilience Process:

“Process” is obviously the key word. Every successful manufacturer, farmer, business owner and manager on the planet knows that a process is needed to reliably produce anything.  That basic management insight is missing in most places that are striving to produce revitalization and/or resilience. Process is seldom present in such situations. As a result, failure is the norm.

Instead, most places stagnate by endlessly producing plans that are never implemented. They launch initiatives that aren’t supported by–and are often sabotaged by—their own policies. They rely on private developers to propose projects, so that governance is reduced to reactive yes/no decisions.

Or they focus on just one or two agendas—like downtown revitalization, heritage renewal or beautification—while ignoring numerous other factors that are crucial to success, like infrastructure renewal, air quality and natural resources restoration.

Or they remain in a stop-start, project-oriented mode, never gaining the momentum and efficiency that comes with an ongoing program. They have to recruit new partnerships—and create new stakeholder engagement efforts—every time they want to do something new.

With a properly-designed strategic renewal process, the shared vision is crafted so that it also be used as part of the performance specifications in subsequent RFPs and RFQs. That way, the stakeholders are automatically represented in every project.

Why do so many places have renewal plans, but not renewal processes? Because the sole purpose of a process if is actually produce something.

But—for too many places—the primary purpose of creating a plan is to be able to say one has a plan: it’s an end unto itself.

Thus, only mayors who are truly committed to improving their community have a renewal process: the rest just want to be perceived as being committed.

Another major factor in the widespread failure of revitalization and resilience efforts is that expertise in the renewal process—in the few places where it’s actually present—is usually concentrated in a single individual. The best citizen-led (or at least citizen-supported) initiatives comes from informed residents and leaders…those who know how to turn their shared vision into success.

Ironically, the program element is essentially free. It’s simply an organizational function that integrates and perpetuates everything else. But this no-cost element is the one that contributes most to creating that crucial outcome: more confidence in the local future.

A spectacular redevelopment project might be a success in every other respect, but if it doesn’t elevate confidence in the local future, it’s a revitalization failure.  And a resilience failure: how resilient is a place going to be if it’s hemorrhaging residents, employers and investors?
Many communities have business retention programs that are separate from their revitalization efforts. But the most powerful business retention program is building confidence in the future of a place, which should be the primary goal of any revitalization effort.

Instead of creating a place that residents, employers and investors want to be a part of, process-free places rely on baiting them with generic, artificial incentives like tax holidays and free land. Rather than growing their own employers (AKA “economic gardening”), they focus on stealing jobs from other communities by “paying” them to come.

Or they try to create the appearance of confidence via slick marketing campaigns featuring pretty pictures, grand pronouncements and highly-selective statistics. Such tactics occasionally produce a “win”, but seldom reverse the trajectory of a declining economy or quality of life. More substantial changes are usually needed, such as rezoning, rebudgeting and policy revision.

The focus is too often on attracting investors and public funding, but those are the effect of confidence in the local future, not the cause. As Paul Grogan, former CEO of LISC says: “Our greatest problem today stems from lack of confidence as much as lack of money.“

The result is the  RECONOMICS Process.  It’s the state of the art in reliably, efficiently producing resilient prosperity at the local, regional and national levels. And each step in the process is a potential entry point for you to grow your career or organization.

The most spectacular revitalization and resilience successes are usually the ones that have the most elements of the RECONOMICS Process. One of our goals in training and certifying Revitalization & Resilience Facilitators is to help more places create the complete process. Only then can cities, regions and nations fully develop their renewal capacity. Only then can we reliably produce resilient prosperity for all.