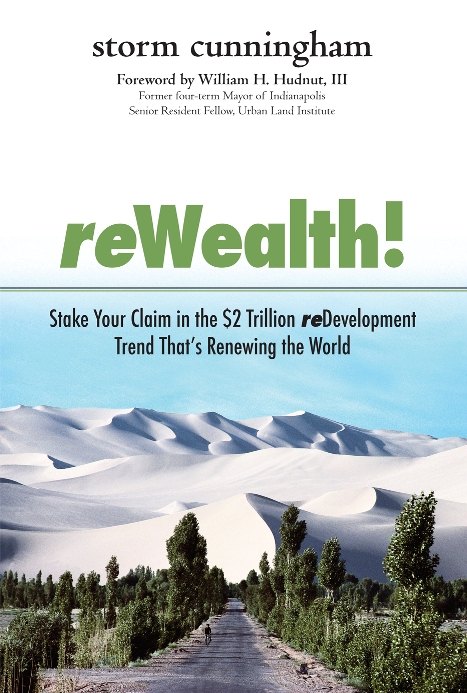 The second of the three courses that comprise the Revitalization & Resilience Facilitator certification program is based on Storm Cunningham‘s revolutionary second book, Rewealth (McGraw-Hill, 2008). This is the book that George L. Ochs, Managing Director of Global Real Assets at JP Morgan (London) said is “the secret weapon of responsible redevelopers, successful real estate investors, and effective community leaders.“

The primary purpose of Course Two is to give you a thorough background on the rise of more-enlightened community revitalization practices. This is the focus of Rewealth, which includes case studies of communities large and small in the United States and Europe.

As can be expected of any book that’s over a decade old, some of the terminology has evolved, as have some of the organizations mentioned. For instance, the “renewal engine” terminology mentioned in Rewealth is now referred to as the “ongoing program” that is a key part of the RECONOMICS Process.

The passing score for tests is 70%. You must complete Course One and Course Two before starting Course Three.

Sign up for occasional updates and offers (no more than one per month).
This is NOT a REVITALIZATION subscription, which members get automatically,
and which non-members can get at revitalization.org.

Scroll to Top
Login
Accessing this course requires a login. Please enter your credentials below!
Lost Your Password?